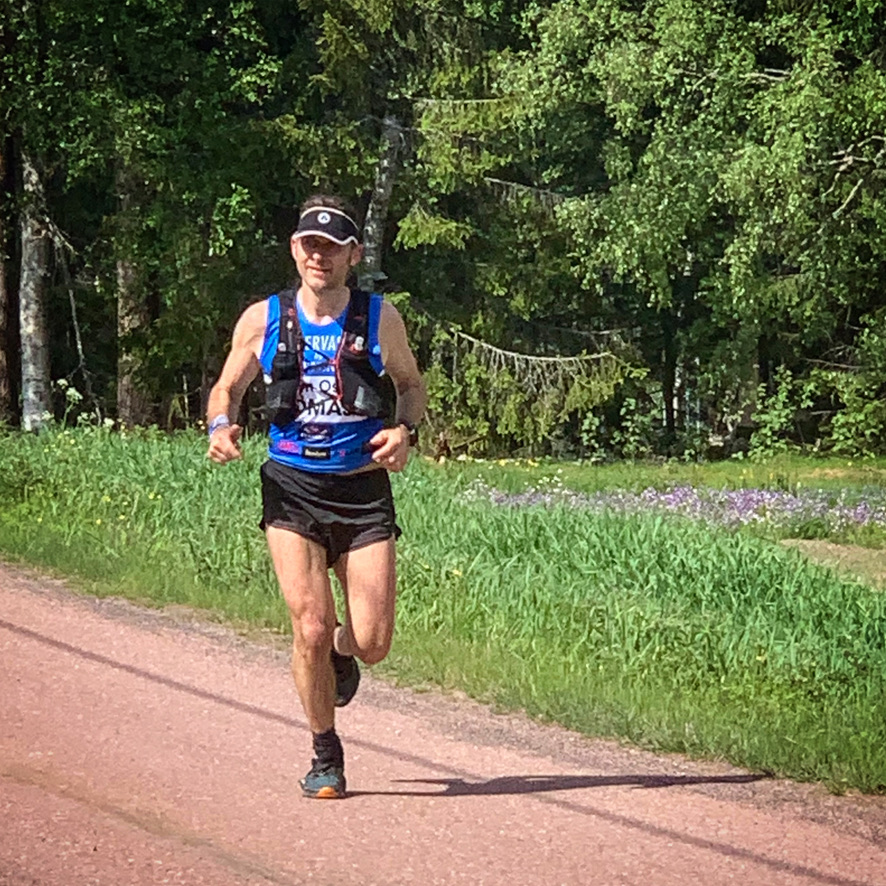 Supervasan is a Swedish challenge where you as a team shall do 90 km roller skis, 90 km Mountainbike and 90 km trail-running.

5 June 2021 Tomas Amneskog, Arduua Runner, participated in Supervasan Challenge in Sweden. together with his team, Mattias Landgren and Mattias Svahn. The team challenge was to challenge Oscar Olsson, who was doing all disciplines by himself.

First out Mattias on roller skis, then Johan on Mountainbike, and at last Tomas finished of the race with 90 km trail-runnning.

4 weeks ago Johan Landgren asked me if I wanted to run a relay between Sälen and Mora. There were three parts, roller skiing, MTB and running, all at 90 km each. Of course, I said yes!

I did not get much information about the setup itself, but two weeks before the race we changed the training, and worked more on the intended competition speed, ie long sessions in zone 2, combined with high-intensity sessions. For me, it meant staying around 130 in pulse, and adjusting the speed accordingly. last weekend I ran two long passes of 2 and three hours, a total of 5 hours, where I ran 61km with an average speed of 4:50 min/km. So it seemed reasonable that that would be the starting point.

On Tuesday, Oscar Olsson and Frida Zetterström called from the podcast Konditionspodden, for a quick interview just before I stepped out and ran my Tuesday session. Oscar is the man behind the whole set-up, and he travels all the distances himself. I had not received any info about accommodation, but everyone else would stay at Mora Hotel and Spa, so I booked a room there.

On Friday afternoon I went up to Mora, and on the way up Oscar called and said that the .gpx file I had was the wrong one. We would not run the route for the ultra vasa, but instead follow the hiking trail Vasaleden from Berga by to Mora. The distance was the same, but it turned out to be a completely different type of terrain than what I had trained for the first half of the race.

Since it was a relay, it was the team that was support for the others when you did not compete yourself. I did not have to get up at 2 AM to support Mattias Svahn, as Johan and Helena took care of this. The plan was that Mattias would switch to Johan at 08:30, and that Helena and I would then take the car towards Sälen and support Johan on the road. But he was fast Mattias, and came in already 08:06, so it got a little stressful. I just had time to get some breakfast before we had to leave.

It got a a lot more stressful, when a miss in the communication meant that we were not present at the first check where Johan wanted support, so we had to turn around and chase his position via the tracker he was wearing. The third attempt was successful, and he got enough energy to make it to Evertsberg, which is halfway. We also stayed inMångsbodarna and waited for Johan, before we ran down to the start in Berga by.

We got to the start shortly after Oscar had left, and a reporter from malungsbladet asked some questions, which resulted in me being in a bit of an article about Supervasan

At the same time, Konditionspodden started broadcasting from my race, with a report from the start.

The first two stages on Vasaleden are fantastic! First 2 km uphill, the same stretch as the Vasaloppet, then into the forest and 7km on fairly technical small forest singletrails in fairly hilly terrain. I was not prepared for it to be so nice, and the joy of running was at its peak. Floated through the forest just over 5-pace, but the pulse was just below the threshold, so it took more power than expected.

When I came out on the gravel roads at Smågan, I lowered my heart rate to the target zone 2 heart rate, and then the speed was more like the expected 4:40 on the flats.

After a few km on gravel roads, it was again a singletrail to Smågan, but I still kept the plan decent, and still felt quite fresh when Johan and Helena waited with energy replenishment.

I filled a bottle with sports drinks, brought some more gels and ran away. Again a lot more path than expected, and when I found out that I had only picked up 7 minutes on Oscar, I went down a bit in pulse to try to stay around the 130 that was planned.

On the distances where it was easy to run I could still keep around 5 min / km, but as you can see from the total km time over the distance, it was not so easy to run overall, as the average was almost 6 min / km

At Risbergsbacken, Niklas Axhede showed up with the camera again, so I stopped for a chat. But it was easy, so I asked him if he could run, and there was an interview running. Tomas Amneskog approaches Risberg

After Risberg, things started to get really heavy. The heat and the hard opening made me lose pace. Until now, I had only run on sports drinks and gels, but when it started to rumble a little in my stomach, I took half a bar. And immediately I got a strong pain on the side of the stomache. A little surprising, because I have not had this for several years. I had to go and stretch my stomach for a good while to make it drop.

My newly fixed Altra Olympus burst when I ran into a rock, and  then I thought I was changing shoes in Evertsberg. But of course I forgot. It was very hot now, so by the lakes before Evertsberg I went down and dipped my upper body, and got new energy.

At the finish, Niklas waited again, and here is a nice insight into how it feels when you have run into the wall. Amneskog arrived in Evertsberg

After Evertsberg it goes downhill. And immediately I realized that I should have changed shoes. Normally, it is now possible to roll on and save time, but the thighs were properly smoked by now, so every step performed was a torment. Still tried to roll on as best I could.

I knew I was going to deviate from the track just before Oxberg, but missed the exit, and ran past. Had to turn around and take an extra hill up to the control. Was quite worn when I came up here, and the interview may sound a bit confused, but the only thing I thought about was that I would not forget to change shoes. Tomas Amneskog in Oxberg

Changed shoes to Craft, and immediately felt that I got a little more energy, even though it was not visible directly on the mileage. All uphills were walking slopes now. Still hot, so I stopped at every creek I could find and cooled off. My stomach still could not accept any food, so after the banana I put in me in Oxberg I had to go and stretch away again.

Now the mosquitoes had also begun to appear when the sun set a little, and every time there was a hill, they came. It was pretty good, as the only way to get rid of them was to run. And that made me pick up the pace a bit. And believe it or not, now it started to feel better again. I could float on as best I could, and felt that I also felt a little better when it got cooler.

In Eldris, Johan would keep up with the last part towards the finish, so I was looking forward to some company.

Johan set a pace that felt a little high, but I told him to keep it. It would go a little faster towards the finish then. So I hung on. Now the slopes were no longer walking slopes, and we ran at the same pace all the time.

Towards Mora, I felt refreshed, and we gradually increased the speed towards the final stretch, and I could drive the last kilometer in sub 4 speed, The legs protested of course, but it was just to relax and push.

At the finish, Frida waited with the interview mic immediately after I had crossed the line, and I tried to summarize it as best I could. Supervasan 2021 – Finish Tomas Amneskog

We would have champagne when the women’s team went to the finish, which would be just over half an hour later. So I got home to the hotel to change and shower. And just as we were about to toast, I became dizzy and nauseous, and had to lie down. The heat during the day, and the fact that I did not have time to get any food in me, caught up.

The next few days I had a really sore thighs. Such a pain I only have after a really challenging mountain race. So even a relatively, on paper, flat track can be a tough challenge.