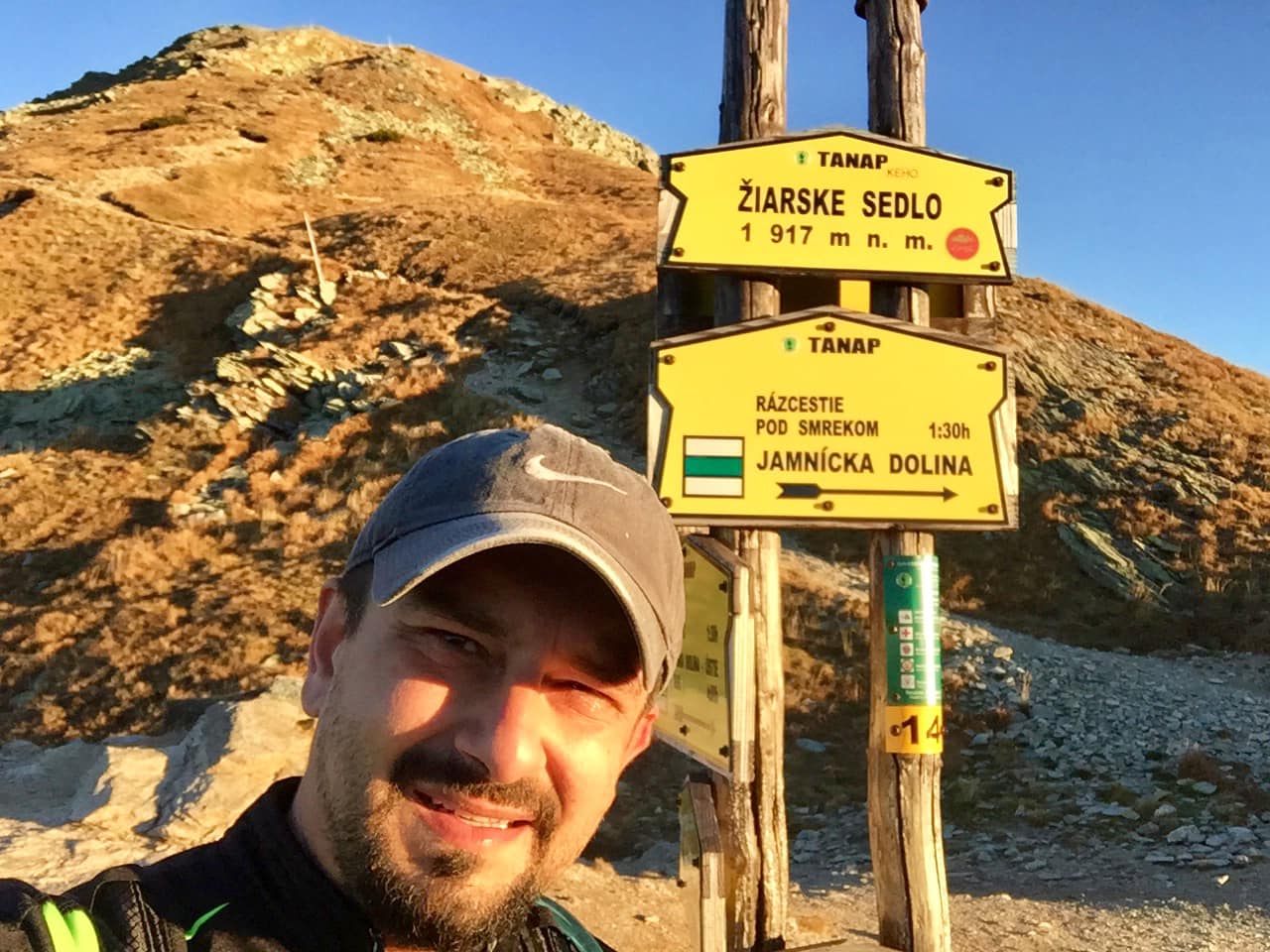 He found a new lifestyle in Skyrunning

One day he woke up with breathing problems and weighing 92kg, when he saw some crazy people running uphill in front of his house. This new idea started to grow..

Michal is a 39-year old entrepreneur from Slovakia with a passion for running, especially in the mountains.

Like for many other hard-working people out there, training hasn’t always been top priority, but that has come to change now.

This year he became the Winner of the Month in the SkyRunner Virtual Challenge, and now he is taking on some new challenges and is training with Arduua.

This is Michal’s story…

I grew up in a valley between Low Tatras and Western Tatras so I have a close relationship to mountains from an early childhood. We did a lot of hiking and cycling in the summer and skiing during the winter. A local slalom slope was so close that I was literally putting on my ski boots in a living room. During my school years I loved any sport where you need to put a big amount of power for a relatively short time. Anyone running more than 100 meters I considered to be strange!

The first 18 years that describes me as always moving. Then another 18 years came, best described as never moving. University, work, family… and all the stuff that became more important than sport. For sure, I had several periods of sport activity over that time, but none of that lived longer than a month. One day I woke up weighing 92kg and having difficulty breathing just from walking upstairs. At that time, I saw some crazy people with numbers pinned to their shirts running uphill in front of my house.

Running 2.5km with 250m of elevation gain? Shit, crazy! Well, if they can do this, I can do a marathon! (Un)fortunately I am so stubborn, that I did it. It was 2016, my third year of what I called “running” at that time. A period which still was more running periods than sustained running training. Just imagine that my running total of the whole 2016 was 207 km and a marathon is already counted in that funny number.

During January 2017, I destroyed my knee while skiing. Total ACL rupture, partial ruptures of lateral knee ligaments and meniscus. Disaster, which looking backwards, it was the best thing that could have happened to me. I wanted to ski and run again so badly, that I admit I needed a plan for recovery. And a training plan was born. The first part was for two months prior the surgery to build as much muscle as possible. The second part for six months after the surgery with the goal to run again in September that year. It all went so well that my first run was already in June, short and slow and penguin-like, but it was a run. Since then, the knee has taken 5000 km, two marathons and two sky races and I started to consider people with numbers pinned to shirts and running uphill as normal. A simple marathon is not a challenge anymore since a Skymarathon became the new one. Approximately 1km from my house there is a starting line of local 100km+/6000D+ race. That would be a sin not to participate in the future, the only thing is that the race becomes longer each year, so the earlier the better.

Can you describe yourself with two sentences?

I’m a person who needs goals and challenges, but only those established by myself. And I always try to look at a bright side of life.

What is most important for you in life?

Freedom. That is what I have found in running.

Where does your passion for skyrunning come from?

It started when I brought home new dog – a weimarer called Arya. This is very active and agile breed with need for long walks. Since the long walks were quite boring, we started to run. As the time passed by, I found myself running mostly on trails and I realized that I started to love it more than running on roads. The trails became longer, the elevation rose up. And that is it. It was not an intentional change; it just came slowly.

Can you describe your significant personal strengths that took you all the way to this level of running?

I’m stubborn enough to fulfil the challenges that I take.

Is Skyrunning a hobby or is it something you do for a living?

Skyrunning (running in general) is a pure hobby for me right now. I run my own consulting company focused on real estate, finance and business development. But I am an entrepreneur, so if an opportunity to connect a hobby with my professional life appears, I am open to that.

Have you always had this type of lifestyle or have you had any change in direction?

I switched my lifestyle after a quite long period of inactivity, mainly for a health reason. And it simply became a passion.

Which is the most challenging and demanding situations that you been through to get you where you are today as a person?

I went through bankruptcy of my first company which brought some very difficult times to me and my family. Running helped me a lot to cope with that. It gave me a lot of time to think and figure out possible solutions. On the top of that, my knee injury happened at the same time. I developed some kind of training routine to focus on something else. That allowed me not to think of it all the time and to be tired enough to sleep well. I just learned that nothing is so serious as it looks at the first sight.

Do you usually push yourself outside your comfort zone? How does it feel at the time? Can you see that the rewards coming out of this is worth this little extra effort?

Not so much in training so far. This happens to me more often during the races, as I have quite a talent to pick up a race which I am not prepared for. But it is fine, I finished all so far and learned a lot by doing that. Each of those races pointed on something I should focus more.

What do your race plans and goals look like for 2020?

It is not clear at this moment because everything was moved to autumn and it looks pretty scary with no time for rest. I will have to rebuild the schedule completely. The race which is on the top of my list is Poludnica Run in October.

What does a normal week of training look like for you?

I’ve been training for a marathon in Prague which should be held in May. Since it has been moved to October, I kept running for fun to maintain general fitness. It was like 4-6 times a week with a total of 50-60 km.

What are your best training tips to other Skyrunners all over the world?

If you want to feed your ego, first of all, you have to stop listening to it. Otherwise it will eat you.

One day I would like to do a big race, e.g. UTMB, Zegama or Sierre Zinal.

Honestly I don’t know how to describe it. I just like to run and I want to run. So I run. And I really like the feeling of getting better. Better than previous myself.

What is your advice to other people who are dreaming of an active lifestyle and running in the mountains?

Nothing exceptional, just stand up and go for it.

Thank you, Michal, for taking the time to share your amazing story! Very inspiring!

Wishing you all the best luck in the future with your running and everything that you want to do in life.