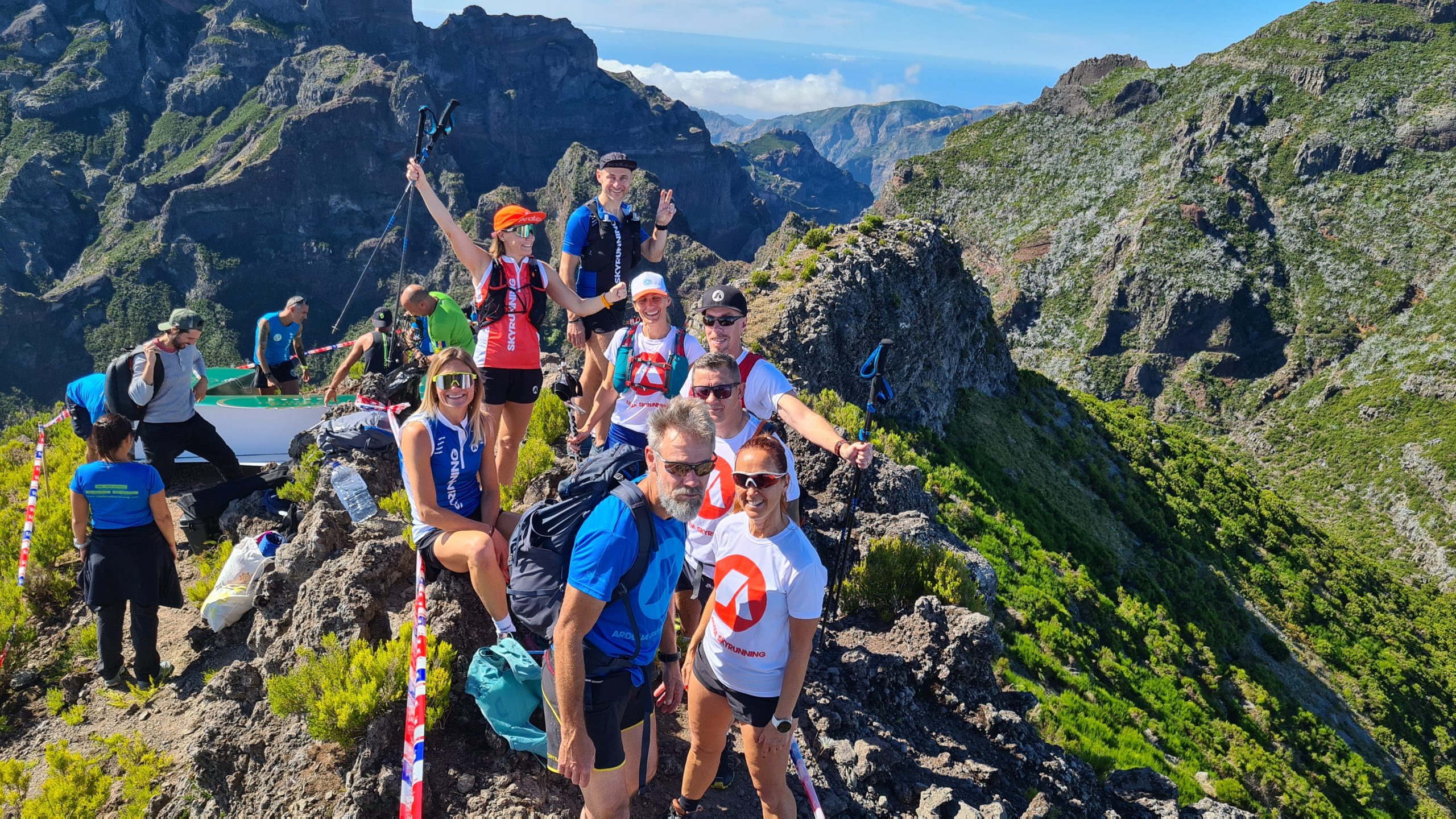 Located in the stunning surroundings of Santana, the famous Madeira Skyrace takes place. A very technical mountain race which consists of steep slopes and trails, a highly technical degree competition within the field of Skyrunning sports. This year Madeira Skyrace is also part of the Skyrunner World Series.

This past weekend Team Arduua was at the Madeira Island, to run the race, and to enjoy. This was also the first time that Arduua arranged an official trip to a Skyrace for the runners in our team. We were 12 of us who were on site, 9 runners and 3 supporters, as there were many of us who travelled with fiancée and saw this trip as a small, nice child-free mini-holiday.

Me and Fernando arrived at Madeira a couple of days before the rest of the Team, in order to prepare everything for them. We kicked of the first day with a very nice morning coffee, enjoying the beautiful views from the hotel terrasse, Santana in Nature, working making some plans.

In the evening we took our rental car to check out the route to Pico Ruivo 1861 D+, the highest peak of the Island, that we were going to do as a nice trip with the team on Friday. Quite nice and easy route, because the day before a race should always be a rest day, and this route should also be suitable for the supporters (the runners fiancées).

It was a beautiful day, and running above the clouds was like a dream, being in this magical world of Madeira.

After this route we also took a drive to the race area where we were going to pick up our bib numbers, checking out how everything was supposed to work out with Covid tests, bib pick-up etc…

Team Arduua arrives to the Island

The rest of the team arrived on Thursday at Funchal airport, and me and Fernando took turns to pick them up at the airport.

In the evening we started the trip with a cozy team dinner at the hotel. So much fun to finally meet some people and talk about running memories and running together in real world. 🙂

The day before the race

The day before race day we started of with a nice breakfast at the hotell, getting ready for a shorter hiking excursion to Pico Ruivo, the highest peak of the Island.

Most of the route was easy hiking, but in order to mix in some extra excitement, we descided to check out parts of the route from the Madeira Skyrace 55 km race. First I was worried that the fiancees of the runners were not going to make it the chain section, but they did, and they did it very well!

We had a super great day together enjoying the beautiful views, relaxing, having fun!

Getting ready for race day! 🙂

Saturday was race day, and we were three runners (Me, Tomas Amneskog and Fredrik Alfredsson) who got up early in the morning to run the Madeira Skyrace 55 km, 4100 D + race, with start time 6:00.

The starting-line was dark, filled with runners with all the headlights. They played very loud music, and the atmosphere was full of expectations.

The first up-hill to Achada do Teixeira, was super long and technical, and it was also very dark, and for me that was a little bit difficult, and it felt mentally hard. But just when I arrived at the first checkpoint the sun begun to rise, and it started to feel a little bit easier.

In the first peak just after the checkpoint at Achada do Teixeira, there were a small chain section to climb (actually the same route that we did on Friday). Not that difficult and the security was also very high with people from the race there equipped with climbing equipment, just in case.

Just right after that part the more technical and “Jurassic Park” jungle look alike section started. This area was amazing, and lots of climbing with ropes and wires. We were also running on the ridge on below mountain.

After this very technical and interesting part of the race I hit the second checkpoint at Pico ruivo.

After that it was the longest and most technical downhill of the race all the way from Pico Ruivo, 1865 meters of altitude to sea level. Fredrik Alfredsson also took the opportunity to take a bath in the sea. 🙂

Just before starting the second long uphill of the race, I passed the river section of the race. Here it was about 1 km actually in the river, sometimes with water up to the waist.

By this time, I felt super strong and I had a lot of power and energy left. Just after the river I entered the 42 km checkpoint. Only 13 km more to go, and I started to speed up, going faster in the end of the race!

After 12:37 hours I crossed the finish line in Santana village, and Team Arduua was there cheering me on. I was completely exhausted, but super happy, and to my greatest surprise I finished as nr 3 in F40 and 10:th overall.

Wow!! what a magical race! Absolutely super hard, technical and at the same time absolutely wonderful. The race offered everything from long hard uphill’s, magical views, rope climbing, Jurassic Park look alike jungle environments, long technical downhills, nice coastlines and about 1 km in the middle of a river in the end of the race.

The rest of Team Arduua also made a super strong effort in their races, and as a team we ended up nr 3 team in the overall ranking.

For these achievements I also like to thank Arduua Head Coach, Fernando Armisén, for his passion and engagements in all the runners and this magical sport!

All in all, it was a super successful trip, and it was super great to be on a race like this as a Team. I wish you all a great recovery, and soon the pre-season training will start!

This was the last big race of the season, and now it’s time to start planning for the next season. Next year Madeira Skyrace will take place in the end of May, and we will for sure be there.

If you are interested in being a part of our international race team and train with us in the Arduua Online Coaching, program please contact me at this e-mail: katinka.nyberg@arduua.com.